Thursday, Friday, and Saturday at Colossalcon, join us by the wave pool for an unforgettable night, as the already phenomenal dance events at the convention join forces with after hours swim for Rave in the Waves. Get ready to dance the night away to the hottest grooves from: 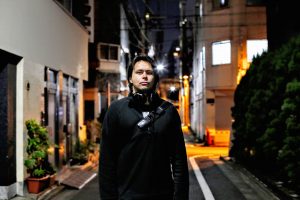 Notorious American J-Pop/K-Pop Remixer, Composer, Skilled Instrumentalist, and Producer, DJ Amaya began making waves when he started introducing audiences to Japanese dance music at anime conventions across the USA, which led to him playing shows in Japan, Singapore, and Sweden as well. Along the way he released 4 full length albums of original music, collaborated with Japanese artists, and has been commissioned to produce tracks and remixes for artists around the globe.

2014 Amaya formed MINIKOMA☆ with popular J-Pop/K-Pop cover artist “Yabisi”, together the duo create original songs in Japanese that span many genre’s, and released their first full length album in Japan “EYES” in April 2016, and performed live to a packed crowd at Anime-Expo 2016 at the Los Angeles Convention Center.

DJ AMAYA – NOTHING IS ORIGINAL

Hailing from Brooklyn, NY, The Contro1freak plays the best music that Nerd, Anime, Meme and Mainstream Dance music culture has to offer. With over a decade of music gathered in his collection containing a multitude of genres ranging from EDM & J-Pop to Hardcore & Drum ‘N’ Bass, he has combined all of these to form a genre that he calls “Anime Dance Music.” No matter the event, whenever he plays you will experience why he is “Your Waifu’s Favorite DJ!”

One of the few DJs that specialize in Japanese music in North America is dj speedycake with his stunning blend of global styles of Happy Hardcore. Seasoned in the unique sound of Japanese Hardcore fresh from the Tokyo underground and combining it with the captivating elements of Otaku culture, dj speedycake brings crowds a unique taste of an old style. Merging the happy melodies of old school rave music with the global craze of Anime, dj speedycake blows away crowds with high adrenaline versions of the crowd’s favorite Japanese and Anime songs. Rising into popularity from his work on Swedish pop song Caramelldansen, dj speedycake has defined a new type of internet sensation of high speed music and Anime dances with several CDs on Exit Tunes and thousands of videos made by fans on Nicovideo and Youtube with millions of views.

Haji is a local DJ from Cleveland specialized in mixing primarily Drum and Bass. Starting with an interest in electronic music 2012, he became quickly immersed in the fast paced music of Drum and Bass. Since then, Haji’s goal is to bring hard fast paced sets to all types of crowds, whether they are anime convention attendees or fans of electronic music and club goers. With a healthy dose of Neurofunk, Jump Up, and Breakbeat, Haji is the embodiment of phrase “The only way to win is by going fast”